Have you ever been stuck on a text response and simply sent an emoji (emoticons for English speakers) to compensate your lack of words?

Well congratulations, you now officially have company in the ‘unlikeliest’ of the places.

That’s right - The Oxford Dictionaries recently announced that the emoji, ‘Face with Tears of Joy’ is its “Word” of the year for 2015! 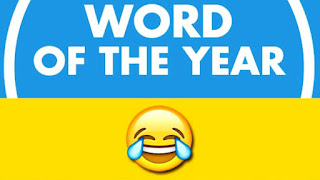 The Oxford Dictionaries have been choosing annual words of the year for years, but this year, for the first time ever, the Oxford Dictionaries Word of the Year is a pictograph and not a traditional word! The pictograph called ‘Face with Tears of Joy’ beat out words like ‘ad blocker,’ ‘on fleek’, ‘lumbersexual’,  ‘refugee’,  ‘sharing economy’ and ‘they’ for the title and became the word of the year that according to Oxford, best reflected the ethos, mood, and preoccupations of 2015.

Emojis came into existence around late 1990s, but 2015 saw a huge uptick their usage. This year Oxford University Press partnered with leading mobile technology business SwiftKey to explore frequency and usage statistics for some of the most popular emoji across the world. And 'Face with Tears of Joy' came out a clear winner as it was the most used emoji globally in 2015. SwiftKey identified that 'Face with Tears of Joy' made up 20% of all the emojis used in the UK in 2015, and 17% of those in the US: a sharp rise from 4% and 9% respectively in 2014.

Casper Grathwohl, president of Oxford Dictionaries, says: "You can see how traditional alphabet scripts
have been struggling to meet the rapid-fire, visually focused demands of 21st Century communication. It's not surprising that a pictographic script like emoji has stepped in to fill those gaps—it's flexible, immediate, and infuses tone beautifully. As a result emojis are becoming an increasingly rich form of communication, one that transcends linguistic borders…”

Sarah Rowley, head of communications, EMEA, at SwiftKey, says: "It seems a fitting end to 2015 that the Oxford Dictionaries Word of the Year is an emoji rather than a traditional word. It has truly been the year of the emoji. For many their appeal lies in how they allow people to express themselves, regardless of the language they are speaking in.”

However, naming 'Face with Tears of Joy' emoji as word of the year has ignited the debate among the ‘intellectuals’ of the world. It is believed that 'Face with Tears of Joy' says nothing of significance about 2015 – and if it does, it’s doing so in quite a roundabout, smug manner. Moreover, the underlying context of choosing "face with tears of joy" as word of the year is that there were no words that spoke quite as loudly as emoji did in 2015, and that simply isn't true.  It also leads us to think how language works in the 21st century.

On the other side it can also be opined that selection of an emoji as word of the year signals cultural and linguistic shift – the moment when emojis arguably became a legitimate part of the way we communicate. One day that might be how we look back on it.


Whatever it is, for now, emoji lovers would be perfectly within their rights to protest, “But it’s called Word of the Year!